END_OF_DOCUMENT_TOKEN_TO_BE_REPLACED

Altar Servers in our parish is very vibrant group. There are 55 Altar Servers and 15 among them are from Academy of St. Stanislaus Kostka. They serve on English and Polish Masses. This year 12 new candidates were accepted to the group of Altar Servers at the Mass on March 4th, 2012.

END_OF_DOCUMENT_TOKEN_TO_BE_REPLACED 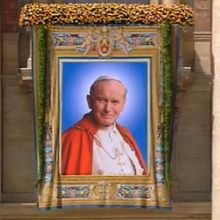 In preparation to beatification of John Paul II Centro Televisione Vaticana (CTV) and YouTube set an agreement, that whole beatification ceremony would have been broadcasted live in YouTube’s GIOVANNIPAULOII channel, the official Vatican’s channel dedicated to John Paul II’s beatification and legacy. As part of the agreement, the complete recording of the event will be stored in YouTube and available public. The video is 4 hours 15 minutes long. If you couldn’t watch the broadcast live, you can do it now.  It covers all the broadcast which started one hour and 10 minutes before the Beatification Mass began. It’s final scenes come from inside the St. Peter’s Basilica where the gasket carrying the corps of Blessed John Paul II was venerated by the Pope, Cardinals and Bishops present in the ceremony.

During first 4 minutes test screen of RAI TV is displayed with audiotrack in the background. Prayers on the St. Peter’s Square prompt to the Beatification Mass take almost 70 minutes of the broadcast. The Mass starts at 1:10:40 and lasts until 3:58:50. Veneration of the corps of Blessed John Paul II is presented during final 15 minutes of the video. END_OF_DOCUMENT_TOKEN_TO_BE_REPLACED

Mass in English language is celebrated on this website and Facebook.com/sskcBrooklyn  at 9 AM every Sunday.